Join The "Farm to Fork" Revolution

Posted by Leahcim Semaj at 7:19 PM No comments:

The Genius of Bob Marley

You may be alive... but are you awake?


"Life is one big road with lots of signs. So when you riding through the ruts, don't complicate your mind. Flee from hate, mischief and jealousy. Don't bury your thoughts, put your vision to reality. Wake Up and Live!" - Bob Marley
... and he went on to ask:
"Open your eyes, look within. Are you satisfied with the life you're living?" - Bob Marley
This is so profound a thought expressed by Dr Marley. Its interesting that when I returned home (Ghana , Africa) in 1996 in speaking with the Ghanians they could not be convinced by me that Bob was not educated to the tertiary level and was at the level of a professor . When I read Bobs thoughts this mornig Lekim i realised that Prof Bob was indeed educated at that level just that his univesity was his great mind...Respect to Bob everytime - Bert Samuels
" If i did go a school i would be a fool" - Marley...There are some minds which do so much better outside of the the strictures of the formal education system......want a great musician ... buy a piano and tell ur child "dont touch it" the great one will hide and play it beyond your dreams ...Agutus Pablo's family is well known to me and he was not "forced" do attend music lessons..he has been recognised as a "genius" in a Time magazine article I read in the 80's -  Bert Samuels
Who is Marley?
Marley is without question one of the most transcendent figures of the past hundred years. The ripples of his unparalleled achievements radiate outward through the river of his music into an ocean of politics, ethics, fashion, philosophy and religion.  His story is a timeless myth made manifest in this iwah, right before our disbelieving eyes. There will come a day when music and its philosophy will become the religion of humanity. If there remains any magic it is music. Unlike mere pop stars, Bob was a moral and religious figure as well as a major record seller internationally.
To whom does he compare?  In a Sunday New York Times Arts and Leisure lead story  Stanley Crouch makes a compelling case for Louis Armstrong as the century's "unequaled performer.” Why Armstrong?  Excelling not just in his instrumental inventiveness but in his vocal style as well, transforming the way music was made and listened to influencing performers of all stripes right down to this very day. You don't see thousands of Maori and Tongans and Fijians gathering annually to pay honor to Louis Armstrong. You don't witness phalanxes of youth wandering the world sporting Louis Armstrong t-shirts. As popular as the Beatles were you hardly see any Beatles shirts around anymore except for those few featuring John Lennon . Can you imagine an image of Elvis sewn onto the sleeve of an armed guerilla? When was the last time you saw a Michael Jackson flag or a Bob Dylan sarong or Madonna rolling papers?  All of these exist in Marleyite forms.  His iconography is now a new universal language the symbol of freedom throughout the world.  - Roger Steffans
Posted by Leahcim Semaj at 8:18 AM No comments:

Is the latest Rising Star going to Crash and Burn?

I was privileged to be part of the live audience at the Courtleigh Auditorium in Kingston, Jamaica, on the night of Sunday September 19, 2010. As I looked in the eyes of Dalton Harris after his victory announcement at the conclusion of the Rising Star 2010 finale, I saw that he was in no way prepared to be 'the most popular artiste' in Jamaica. Divers who come up to the surface too quickly are always in danger of suffering from 'the bends'. So too is the social equivalent of the rapid transition from deprivation to 'stardom'
When I saw his mother crawl out of nowhere up onto the stage and back into his life after her years of absence, I saw his confusion and pain. The return of his father further compounded the confusion.
He may be one million dollars richer but he probable has as many issues and conflicts to unravel.
Digicel should immediately put some systems in place to protect and assist him. If not, the Child Development Agency should step in. He is deep waters and surrounded by 'sharks'. This is a child in need of care and protection. This is an awesome talent to be nurtured and preserved.
Posted by Leahcim Semaj at 8:11 PM 7 comments:

The Biology, Chemistry and Psychology of Love

LOVE'S COMPLEX CHEMISTRY
'We are coming to some understanding of the drive to love--and what an elegant design it is! This passion emanates from the motor of the mind, the caudate nucleus, and it is fueled by at least one of nature's most powerful stimulants, dopamine. When passion is returned, the brain tacks on positive emotions, such as elation and hope. And all the while, regions of the prefrontal cortex monitor the pursuit--planning tactics, calculating gains and losses, and registering one's progress toward the goal: emotional, physical, even spiritual union with the beloved. Nature has produced a powerful mechanism to focus our precious courtship energy on a special other--an evolutionary miracle designed to produce more humans.
"The brain is wider than the sky," wrote Emily Dickinson. Indeed, this 3-lb. blob can generate a need so intense that all the world has sung of it. And to make our lives even more complex, romantic passion is intricately enmeshed with two other basic mating drives, the sex drive and the urge to build a deep attachment to a romantic partner. Ah, the web of love. How these forces feed the flame of life'. (By HELEN FISHER  - Time.com)
Read more: http://www.time.com/time/magazine/article/0,9171,993160-4,00.html#ixzz0zye3qm2f
When you break down the processes as done above, it pales in comparison to the awesome power that love evokes, both negatively and positively. I feel privileged and fortunate to have and continue to experience the joy and life driving energy providing by love.
But remember...

Posted by Leahcim Semaj at 6:00 AM No comments:

Email ThisBlogThis!Share to TwitterShare to FacebookShare to Pinterest
Labels: love

What side are you on?

We are judged not just be your deeds, but also by our words and our thoughts. Many times it is not what you did, but what you failed to do or what you did not say at a critical time.


Sometimes it is your inactivity and silence that condemns you.

Posted by Leahcim Semaj at 9:47 AM No comments:


Ragashanti, the media managers and the advertising community are all educated people. They all make a lot of money off the “moral recklessness” presented on radio. Could the public spat be just a diversion? Could it be that they are all secretly working together to ‘fool-up’ Jamaican people as they advance their power and control?
At the end of each show, is the audience any more informed, enlightened or inspired? Jamaica is in crisis as the fatal flaws in our political and economic model become more evident. Many people are living without hope, more so those trapped in ignorance and poverty. This is the group that is primarily targeted by the "moral recklessness". What if they were to become more conscious of what’s being done to them? How do we ensure that they don’t rise up? What if they start aspiring for more that the latest 'Clarkes', dance or opportunity to 'floss'?
It has been said that an effective component of lion taming is to get the noble beast consumed and obsessed with masturbation. Are we now seeing the social equivalent?

“Let them sort out” (to paraphrase Marie Antoinette) 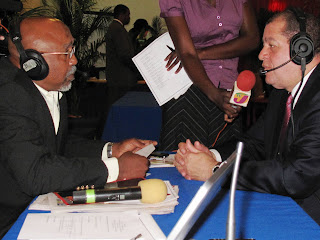 Ragashanti My Brother: Your talents and skills are God's gift to you. What you do with them is your gift to God. Maybe this fact was what motivated Nietzsche to reveal that...

"The essence of all beautiful art, all great art, is gratitude". - Friedrich Nietzsche

But as we continue the 'trial' of Ragashanti in the Court of Public Opinion we should not forget the two more important co-conspirators in the  ‘moral recklessness’  (to quote Dr. Carolyn Cooper) that was committed on the public airways.


They are firstly the management of NewsTalk93  and secondly the advertisers. They both facilitated and profited from Raga's behaviour.  When do we start their trial?

Let's see what happens next, where will the 'moral recklessness' surface? How will the advertisers respond? My bet is as before...'